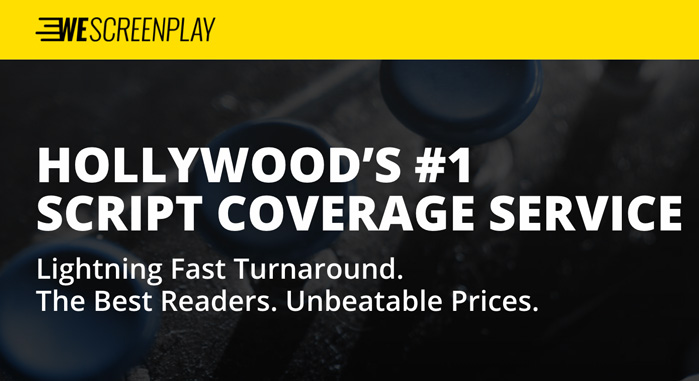 Thank you WeScreenplay for the great feedback for the Cyberpink pilot!

Throughout the script, the dialogue was one of the facets of the narrative that absolutely shined. Comedically, particular favorites occurred at the ‘Grub Restaurant’, where L’s Robot Date states he’s “not an extremist” but believes all biological life should be destroyed by Robots — just not right away (as if that makes it any better). That was hilarious.

I also found Infiniti’s quip about Lenny, the televangelist character, being a money-hungry hack but one who “owns it”, funny as well. As well as Stacyy’s quip about their group having a hit album, “then a series of increasingly less successful albums until we broke up, started fashion lines, then regrouped and gave inspirational talks!” incredibly meta/self-aware and I loved it.

Aside from the other humorous bits that worked (like L’s insistence on dismissing or outright rejecting people’s names at the High School and Mickey’s inability to understand Rich’s emphatic gesticulating through the door), there’s a lot to be said about the dialogue that reveals character.

For example, Eva’s, “there goes the water” when Stacyy calls dibs on the shower first. It’s a simple line of dialogue that goes a long way towards grounding these futuristic characters, and establishing in a very subtle manner that these are all ladies who have been around one another long enough to know each other’s habits inside and out.

On a similar note, for the most part, each character speaks in a manner unique to their characterization. Right off the bat, Dr. Vaughn, for example, felt like his own character, and nothing akin to Infiniti, or Robot Date, or even Dr. Adamma Adaku, despite their similar fields.

Infiniti’s dialogue exchanges with her mother, or Stacyy’s with her robot boyfriend, Ethan, (how are these human/robot relationships “working”, by the way?) all feel real. That can be difficult to do, but you’ve done it and done it well.

There’s not much I can say in the way of making this script markedly better, as I truly feel you did a pretty fantastic job at the sort of the aspects that may warrant a second look, but this is something to consider purely for those who may struggle with a lot of futuristic-esque “tech speak”.

I understand this script has attachments and that this story already exists in what appears to be a visual medium? To that point, I took a look at the website and took a look at a few of the illustrations. Those mediums allow for an audience member to “see” and understand what is being spoken of in a manner far more specific than what a reader is often realistically able to replicate.

For the most part, I understood and could visualize everything. However, I am simply positing to consider as you write if the action description or technology descriptors such that most, if not all, potential readers (and, hey, hopefully, one day executives) can understand, get the picture, and their comprehension of the scene and/or story is not hindered.

On the note of executives, I would be more than a little careful with the formatting here, as well. I did not mind it, I think the art is dope, but the dramatis personae-esque pages you feature at the top of the script, accompanied by all the artwork and links, more than likely will be frowned upon. Those are things to include in a pitch deck or series bible, not so much the script itself.

Overall, I was seriously impressed with the quality of writing on display here. It’s more than evident you have put a lot of hours into perfecting not only your craft but the world of your story as well.

You’ve done a stellar job at crafting an interesting futuristic world for us to inhabit alongside this cast of characters, a rousing issue that is quite timely and has many obvious parallels with our real world, and ended the pilot with a funny quip and intriguing thread that will be very interesting to follow up on in subsequent installments! Again great work.

The reader has previously worked for WarnerMedia’s TBS/TNT/TruTV as a script reader and development assistant.