The CP Girls in Phlog 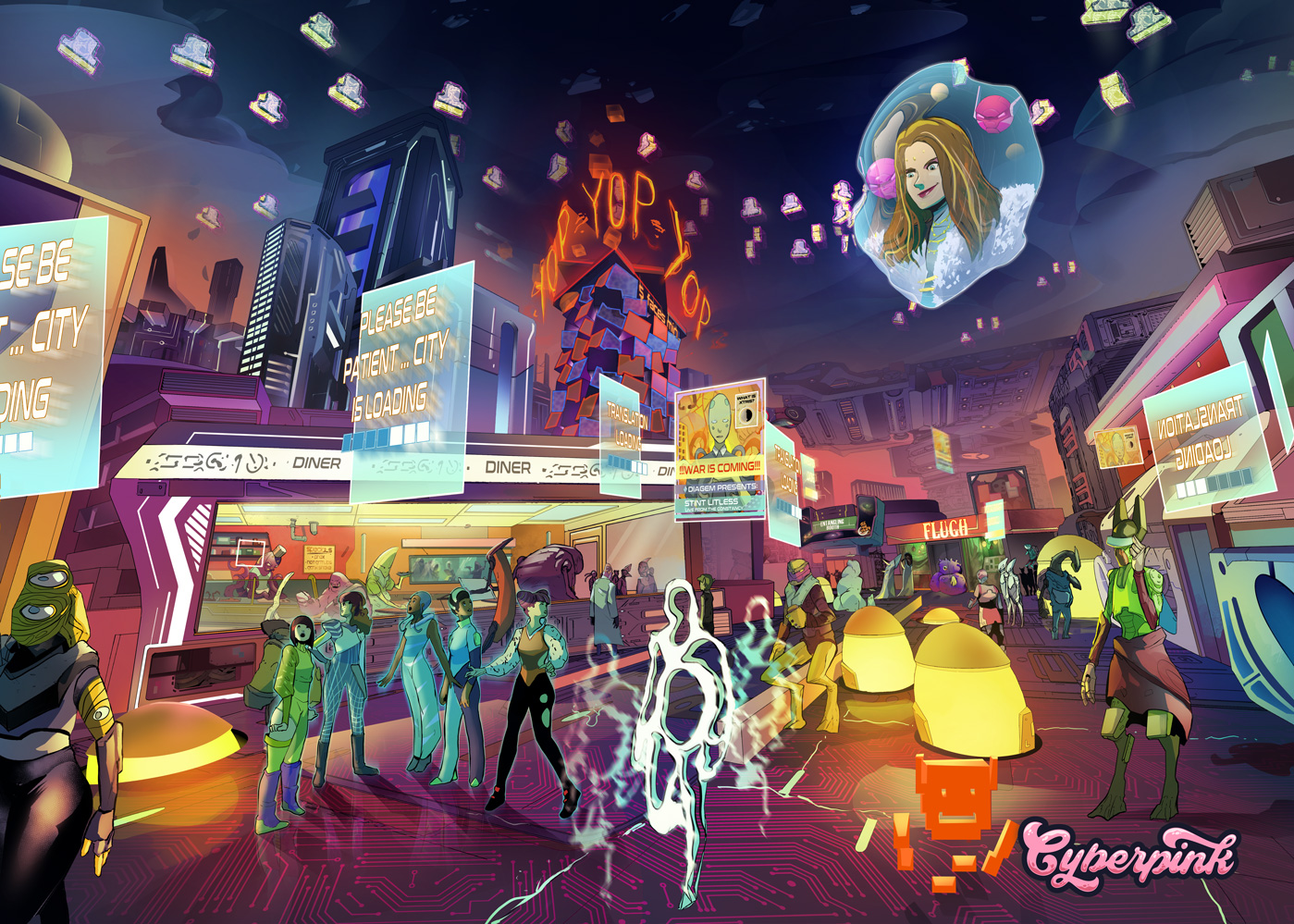 03 Apr The CP Girls in Phlog

The Cyberpink Girls in Phlog

New artwork from Samuel Bermudez showing the girls as they appear in Phlog, sent there by their arch-enemy Aspen Colby.

Here’s a sneak preview chapter from Cyberpink the novel-in-progress:

Aspen’s room stretched in all directions, gleaming white, with ladders and staircases leading to other levels incorporating reading nooks, entertainment centers, various beds, and walk-in closets. One alcove was dedicated entirely to stuffed animals, another to shoes on a carousel of illuminated shelves. Here and there, big holo screens twitched with movies and fashion show replays.

Aspen walked quickly through the space, Betsey following close behind, the room stretching ahead like a small indoor mall.

“Thank you, Aspen!” said Betsey, almost tripping over a small Ferrari the size of a go-cart.

They came to an alcove with a wall-length painting in an ornate golden frame, blocked by a powerful robot sentry.

The robot was seven feet tall, with a face like a medieval knight, its head recessed into a thick carapace set above broad shoulders.

The sentry swiveled its head to Aspen as she approached, eyes glowing.

Aspen placed her hand on its hip, giving it a hard shove.

The robot stepped dutifully aside, revealing a portrait of a beautiful young woman with hard, shrewd eyes, painted in a royal style. The girl’s head was held in a haughty tilt, eyes narrowed, traces of a smile at the corners of her mouth. She wore a white, fur-trimmed jeweled cape over a black military-cut jacket with silver appliqués of snowflakes and stars. Her platinum blonde ponytail, in a tight fishtail braid, was draped in front of one shoulder.

At the girl’s feet — below cropped black pants and riding boots — were piles of human skulls and robotic heads.

A brass plaque under the painting read: “Navarra.”

Betsey stood gaping at it.

“Grams,” said Aspen, with a shrug. She shot Betsey an annoyed look. “Fly’s gonna get in.”

Betsey blinked and closed her mouth.

The wall slid to the side, revealing a gleaming hallway.

They walked until they came to a sterile white room with a console and a desk chair, with a picture window looking into another sterile room.

“To wit,” said Aspen. She glanced at Betsey. “That means, ’this is what I’m talking about.’”

Aspen clapped her hands and the window became a screen, showing the image of a small, white oval with an ergonomic curve.

“This,” said Aspen, “is the key to destroying Eva Zhang.”

Betsey looked around, as though just getting her bearings. She squinted at the oval.

“Aha!” said Betsey, rubbing her hands together. “Her tooth-whitening system! We destroy that, and she’ll be stuck with yellow teeth, right before graduation!”

Betsey wrinkled her brow. “Then what is it?”

Aspen snapped her fingers, and the image of the oval projected a drum kit that looked almost indistinguishable from real drums.

“A drum-kit generator,” said Aspen. “Drum students use holographic drums, so they don’t have to carry a kit around. Each student is assigned a unique generator by the Music Department at the beginning of term.”

“Aha!” said Betsey. “We destroy her generator thing, and she can’t perform anymore!”

“No, moron,” said Aspen. “They would just replace it. Stop interrupting with your dumb …” she waved at her, “stuff.”

Behind them, from the little hallway, came Baxter’s voice. “Miss, lunch —“

“But it isn’t just a projector,” continued Aspen. “It records everything Eva plays, all term, so the teachers can see how much she practices, how much she’s improved based on various metrics, etc. But here’s the really important part.”

“The final exam,” Aspen continued, “is also performed with it. The performance is recorded at home, then reviewed later by a music jury. The generator,” she pointed to the oval on-screen again, “has a firewall to prevent cheating. Otherwise students could hack into it and upload a flawless performance and pretend it was theirs.”

“A-ha?” whispered Betsey, looking uncertain where it was going.

Aspen sighed and beckoned Betsey to follow, walking to the second room.

In the middle of the room was a white pedestal with a small glass cube.

Inside was a tiny pink insect: segmented, with long wings.

Betsey bent down to look at it. “What is it?” she whispered.

“Gotta think big. The PEST contains a custom program that will upload itself into Eva’s drum generator and install a fake performance. The music jury will think she tried to cheat.” Aspen clenched a fist. “Boom. Instant fail.”

“Whoa,” whispered Betsey, straightening up again. “This is genius. But … how?”

“Her locker,” said Aspen. “That’s where Eva keeps the generator between classes.” She pursed her lips. “The PEST’s only weakness is it’s fragile. So I’m going to send a few PESTS in. Only one has to make it into her locker and install the program. Then,” she wiggled her fingers, “poof, they all auto-magically dissolve.”

“Wow!” said Betsey. “But I thought you said the drum generator had security?”

“It’s high school-level security. And the PEST is small enough to get around the school’s blocking field.”

“Come on,” said Aspen, walking back to the first room. “You look like a confused cave person.”

“Next order of business,” said Aspen.

She clapped her hands again and the oval and drum kit vanished, replaced by a new image: a golf ball-size orb with a single eye.

“Yep,” said Aspen. “The thing that’s been spying on us all semester. Whatever it is.”

“Of course it’s a robot, dum-dum. But what kind? I had one of my tracking drones follow it leaving school, and you’ll never guess where it went?”

“What?!” said Betsey. She gritted her teeth, dark eyes glittering under choppy, eyebrow-grazing bangs. “We’ve been working her pretty hard.” She made a fist. “Maybe it’s time to turn up the heat!”

“To be honest,” said Aspen, looking at the orb, “I almost admire it. I had her figured for a pushover. This is next-level sneak.” She nodded her head silently. “Anyway, for this thing, we’ll need a more blunt approach.”

“It’s obviously custom, so without knowing anything about its programming, we can’t do much. This one will have to be destroyed, plain and simple. That’s where my GOTCHA program will come in.”

“We don’t know if it’s alive! But what did they expect?”

She clapped her hands again and the image vanished.

“Besides,” she said, turning to Betsey and poking her in the chest. “Veronica’s a nobody. Who’s going to care?”