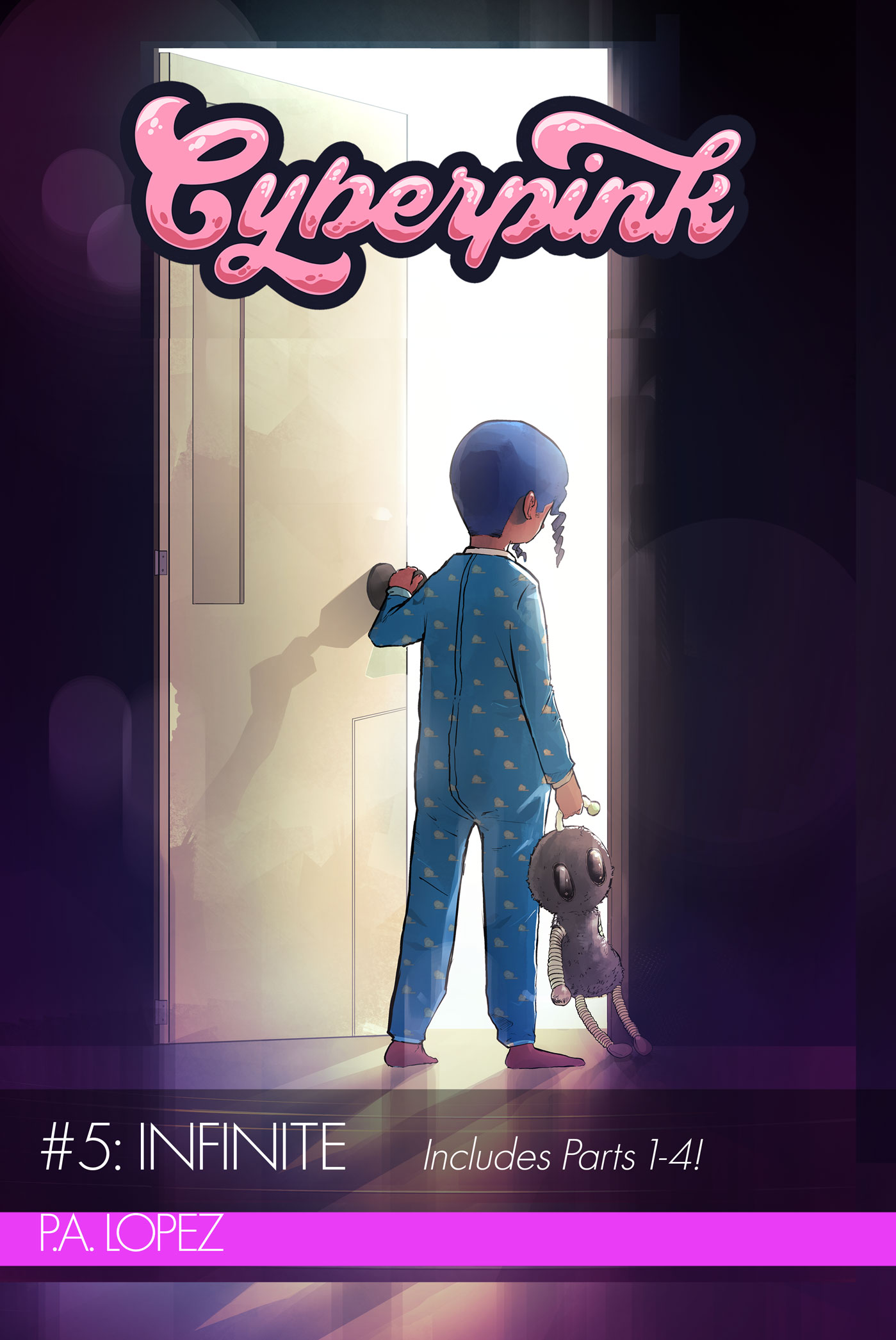 Another sneak preview from Cyberpink 5:

Infiniti’s brother lay in his bed, reading a textbook: Advanced Q-Rel II. She’d come in wearing her footie pajamas and carrying her favorite stuffed toy: a plush alien she held by its soft single antenna.

Graeme was illuminated by a small hovering orb. Beyond the cone of light, the room’s walls were covered in scientific charts and posters: a periodic table; posters classifying quantum fields and dissecting the solar system, the Milky Way, the galactic neighborhood; one with field equations, and still another probing the mystery of the arrow of time.

Across from the bed, an entire bookshelf was filled with the academic trophies he’d been accumulating his entire life.

His brown locks grazed big, expressive eyes, and he smiled at her the way he always did: as though her entrance had been some stroke of good fortune; a pleasant surprise that was somehow ever-new.

For a moment, it was a normal evening. Then the thumb holding the book jerked.

“What’s going on, Ron? Why are you still awake?”

She looked down at the ground. “I couldn’t sleep.”

He put the book down, frowning slightly. “Why’s that, noodle?”

She smiled, then scowled to cover it up. “Don’t call me noodle. I’m ten now.”

He laughed. “That’s right; you’re a big girl now.” He made a bicep gesture. “Big and strong.”

She came over, walking into the cone of light, and sat at the edge of his bed.

He tapped her gently on the forehead. “What’s going on in that big brain of yours?”

“It’s not big like yours,” she said, looking away.

“I’m not a noodle,” she said again, smiling.

He smiled back, then looked at her expectantly. “What’s on your mind?”

She paused to collect her thoughts.

“Today,” she began, “Teacher was talking about time.”

“Big subject.” He poked her playfully in the ribs. “And what trouble has time been stirring up?”

She flexed away with a smile, then looked up, thinking.

Graeme nodded. “That’s right. According to the calculations of general relativity, all of time has already happened. We’re just moving through it. We perceive forward motion, but each moment has always existed, and always will exist.”

She was afraid of the words she wanted to say next.  She took a deep breath. “What Dad said today,” she said hesitantly. “About Nix —“ she tried to remember the rest.

His smile faded for a moment, then returned. “Nix-Stilner Syndrome,” he said.

He finished her thought for her: “What if Dad can’t cure me?”

“Because Dad,” suddenly she was speaking faster than she could get the words out, “he said — he said there is no cure. And it’s super rare, and people have been looking for a really long time.”

He put his arm around her, and gave her shoulder a light squeeze.

“True,” said Graeme. “But this is his specialty. And that means if anyone can find a solution, he can.”

She sat there in silence.

His thumb twitched again, and he shifted in the bed, wincing slightly.

“Why did you get this, Graeme?”

He gave her a smile that was somehow more sad than happy.

He smiled at her, more warmly now. “But what does that have to do with time?”

“Well,” she said, “I was just worried because of … what Teacher said. Because …” She looked down.

“What if you suffer? Before Dad finds the cure, I mean. If  that’s true about time … being forever … then that suffering … would be … forever.”

He swallowed again. “Don’t worry about that, noo —“

Suddenly she was clinging to him, crying softly into his arm. “You can call me noodle if you want.”

He hugged her close, laughing. She put her arms around him.

His head jerked against hers awkwardly, and she could feel small spasms in his back and sides.

She was sobbing now, unable to stop.

“That’s what matters,” he continued. “That’s the only infinity you need to worry about.”

He hugged her again, more strongly.

“Infinity,” he said, “is how long we’re going to be together.”