A Modern History of the Moon

TIMELINE | HISTORY OF THE MOON

THE WORLD OF THE MID-23RD CENTURY

“The Unexplained Lunar Events of 2245” are a pivotal moment in Earth’s history, leading to robot suffrage and the erosion of human-led governments, setting the stage for the success (and apathy) of the late-24th century and the events of RNWY: A Space Adventure.

A simplified timeline for quick reference can be found here.

THE END OF BIOLOGICAL AGE

By mid-23rd century, the Synths — the beneficent, synthetic quasi-humans who first appeared in 2116 — have been optimizing Earth and the burgeoning Solar System for 108 years, ever since their “First Great Accomplishment“: ending the biological clock and stopping human aging in 2137.

As Re-Youthing (the total regeneration of the human body to a youthful state) won’t be perfected until late-23rd century, by 2245 there’s a large “legacy” population on Earth: people of various ages (such as Infiniti’s parents) who are “stuck” in their older bodies (many of whom prefer it that way), but simply no longer age.

As overpopulation and high rents continue to pose challenges on Earth, many are heading to the recently terraformed moon, Mars (still under domes, with a promise of terraforming to come), or start-up colonies on Ganymede, Callisto, and Titan.

Others have joined orbital caravans and cities in the asteroids, with some circling the rings of Saturn, also home to a new casino district.

By the mid-22nd century, the Synths follow their First Great Accomplishment with three more, solidifying their place in society.

Their Second Great Accomplishment is the end of scarcity, building molecular food synthesizers and optimizing the economy so all citizens receive a guaranteed income (or Stipend).

Their Third Great Accomplishment is improving spaceship engine design so humans can easily reach other parts of the System.

And their Fourth Great Accomplishment is mastering gravitation, allowing for terraforming, among other technological innovations.

They create ThingsNet to coordinate movement of ships and devices, and in 2210 — 35 years before the events of Cyberpink — the Citizenship Test is adopted for all AIs, granting AIs who pass a “modified citizenship” with all rights except the right to vote.

Although right-to-life for sentient algorithms and Synths has existed in various laws since the 2100s, 2210 further codifies the three Non-Human Sentient Rights (commonly known as “Robot Rights” or the “Three Freedoms”) in the Systema Carta (or Solar System Government Charter):

The Three Freedoms for Sentients

In the late-2000s, the moon is divided into eight geographic areas: four nearside quadrants and four farside quadrants (“near” and “far” having no real meaning once the moon begins to rotate), 25 territories each, for a total of 200 lunar territories.

As the Near Side began to be domed and colonized, the Far Side was largely neglected until news of terraforming broke, at which point much of it was bought up by Earth’s super-wealthy, with other tracts designated ecological preserves.

Unlike Earth — nominally governed by humans but led by Synth “advisors” — the moon is 100% human-run. And poorly, according to many.

In 2215, 115 years after the first domed lunar colonies, lunar terraforming begins, under the direction of the Synths.

Next, an atmosphere was generated using direct molecular assemblers: similar technology to the food synthesizers. And finally water was brought in from comets to fill the “mare,” or lowland seas. Plants were introduced, and the land was seeded.

New Hollywood is located in lunar Near-Quadrant 3, Territory 2 (NQ3T2), in a region known as Nubium-Nectaris, located between the Nubium and Nectaris seas.

NewHoll was originally created for off-planet film production on giant, domed sound stages, which have since moved to the pricey “Far Side” to take advantage of outdoor vistas.

Today, although no longer the center of film and TV production (except for scattered offices), NewHoll remains attractive because of its name and cinematic history, feeding a burgeoning music and VR entertainment mecca, with many moving to the more gentrified, but still affordable, areas around Anděl Reservoir on the East Side.

The West Side — with its proximity to Hipparchus and Alba lakes — is largely home to the wealthy, with the most moneyed occupying the toney Ritchey Estates, these citizens often derisively referred to as the “Ritchey Rich.”

NewHoll’s Mayor is the divisive Mathis Tol, and the local territory Governor is Numian Friday, a sketchy character from Earth: neither of whom seem prepared to address problems of robotic homelessness.

Large robotic encampments have grown around NewHoll’s southern reaches, the location of quarries and the massive, now-dead studio lots.

Historically, the “The Unexplained Lunar Events of 2245” will lead to the suffrage of all robots, five years after the events of Cyberpink.

In the longer view, the failure of human lunar government during the events of Cyberpink will lead to the Synths’ being nominated and elected by humans to run Luna in an official capacity, opening the door to elected Synths on Earth and accelerating the erosion of human control over the System.

By 2260, the Solar System will be governed almost entirely by Synths, even as the Synths — considered a distinct “artificial species,” separate from the plethora of AI types — continue to exist in a grey area of citizenship themselves, never having requested either citizenship or the right to vote.

The Synths will eventually be granted the vote 2305, largely by the AI voting block, as humans will have increasingly ceased voting at all.

Eventually, even AIs will stop voting, as society slumps into the apathy that sets the stage for the events of RNWY: A Space Adventure and the events of 2399. 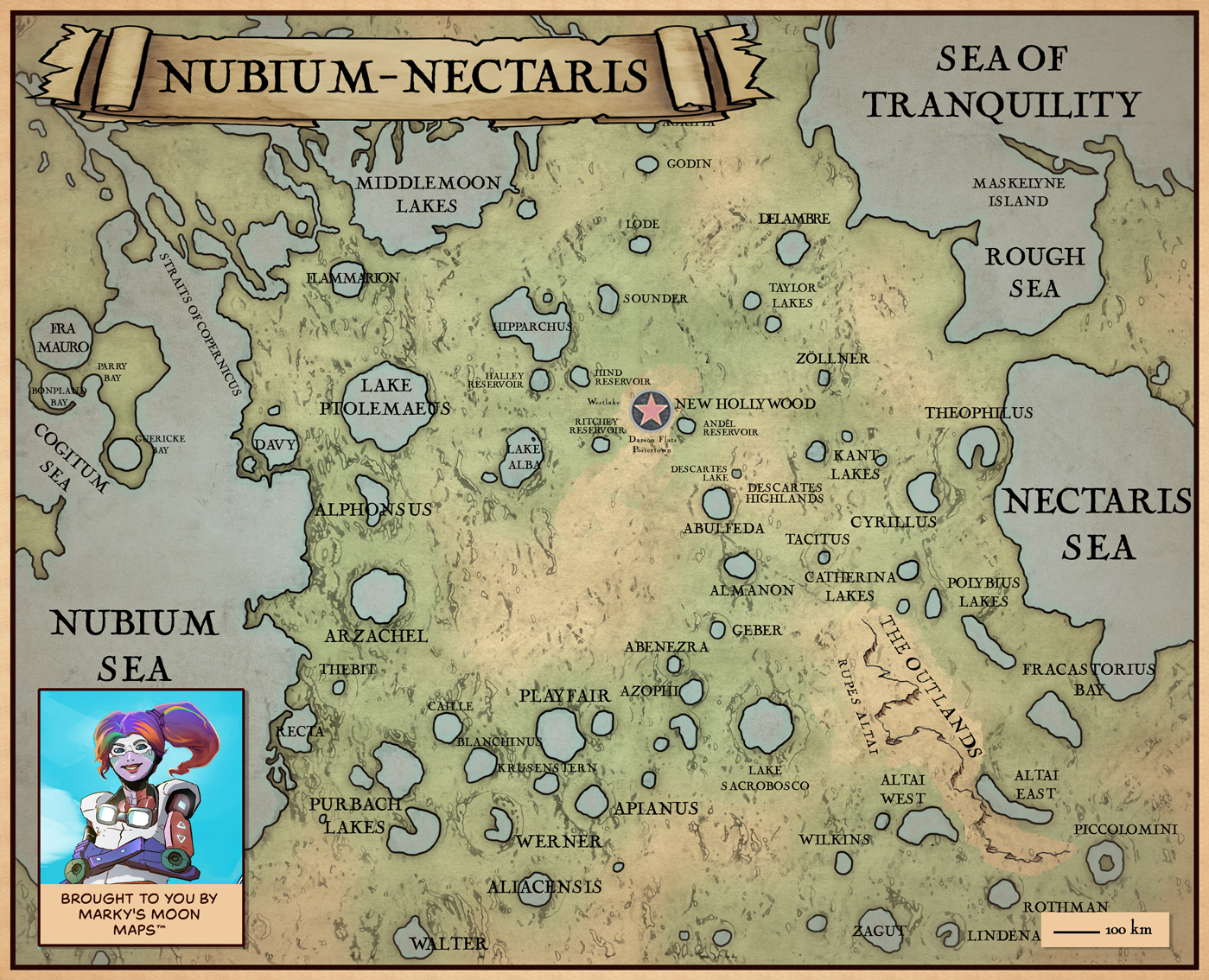 Nubium-Nectaris, the area around New Hollywood where the events take place, as depicted in Marky’s “Pirate Map” style