The collector’s 1st edition pilot screenplay for Cyberpink, the TV series, is now on Amazon. 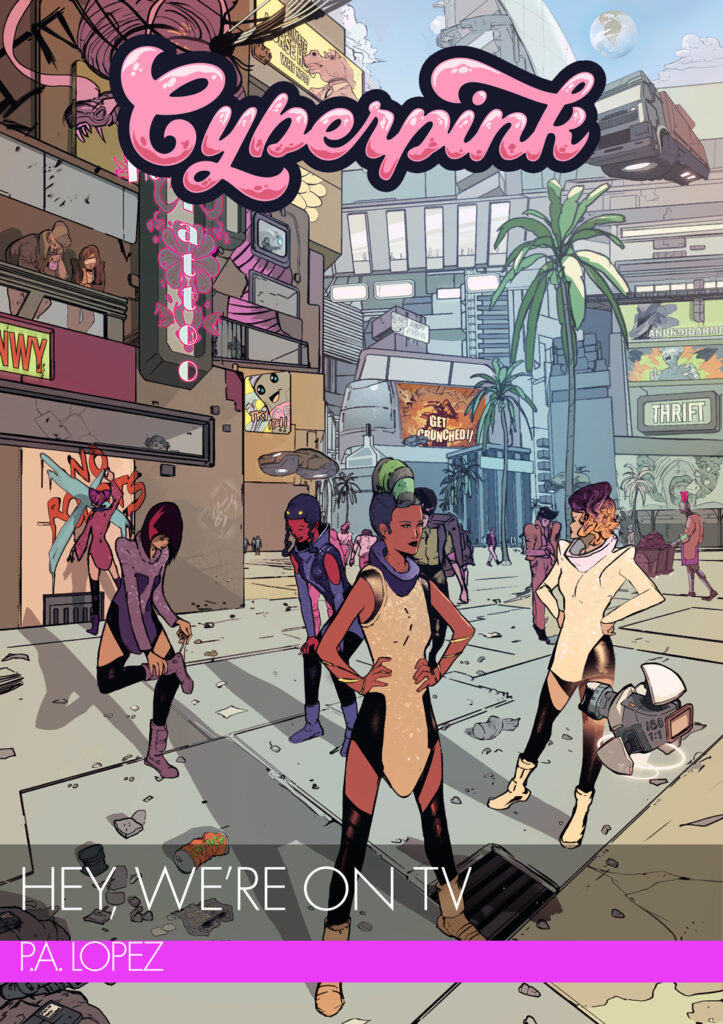 (Note: This pilot is subject to change in production.)

What happens when a failed rock band takes a stand against racism? In New Hollywood on the terraformed moon, a struggling all-girl band must find the cause of a string of disappearances that are pitting humans against robots.

Cyberpink is a sci-fi comedy/adventure series about five girls who move to the terraformed moon in search of fame and fortune, and find themselves at the center of a conflict between robots and humans.

When a mysterious string of disappearances pits humans against robots, they run afoul of anti-robot music booker Mickey Rat, forcing them to choose between their dreams and doing the right thing.

The series follows their fight against the Anti-Robot Coalition as they work to uncover the actual cause of the disappearances as they attempt to unite humans and robots.

Thematically it’s a story about the power of friendship and “the family you make,” in direct contrast to the issue of “other-ness” and division.

The events take place in 23rd century, in an area of the terraformed moon known as New Hollywood, with much of the action happening in the CP girls’ boho, shabby-chic warehouse home.

The moon has only recently been terraformed, under the guidance of the Synths: a form of beneficent synthetic human (not to be confused with robots) who have quietly revolutionized science and medicine, with Mars slated as their next big project.

But the Moon’s terraforming has come with costs. The early settlers (or “domers”) who occupied the lowlands (now seas) had to resettle to higher ground, and harbor resentments against the influx of immigrants from Earth looking to escape the increasingly high cost of living on Earth.

Many of the immigrants are also robots: easy scapegoats for resentful humans during a difficult transitional period of rising rents and too-few jobs.

In the 23rd century, robots come in all shapes and sizes. Some — like Stacyÿ’s boyfriend Ethan — are almost-human. Others are retro boxy models, hovering pods, floor models, etc.

Although robots have not yet been granted the right to vote, they enjoy the “Three Freedoms:” Right to Life, Right to Voluntary Work (no forced labor), and Right to Payment for Work.

They are bound to the same laws as humans, but their population has been strictly controlled to limit overpopulation and job scarcity.

Overall, they behave much as humans do: some work; some choose not to. More (and better-paying) work means the ability to upgrade one’s body (if so desired), or enjoy more comforts and conveniences.

Cyberpink is an adventure that takes place in the RNWY Universe, as detailed in the book RNWY: A Space Adventure. (See RNWYUniverse.com.)

Cyberpink will also soon be released as a novel in serial-release format.