Cyberpink #1: GET CRUNCHED is now on Amazon 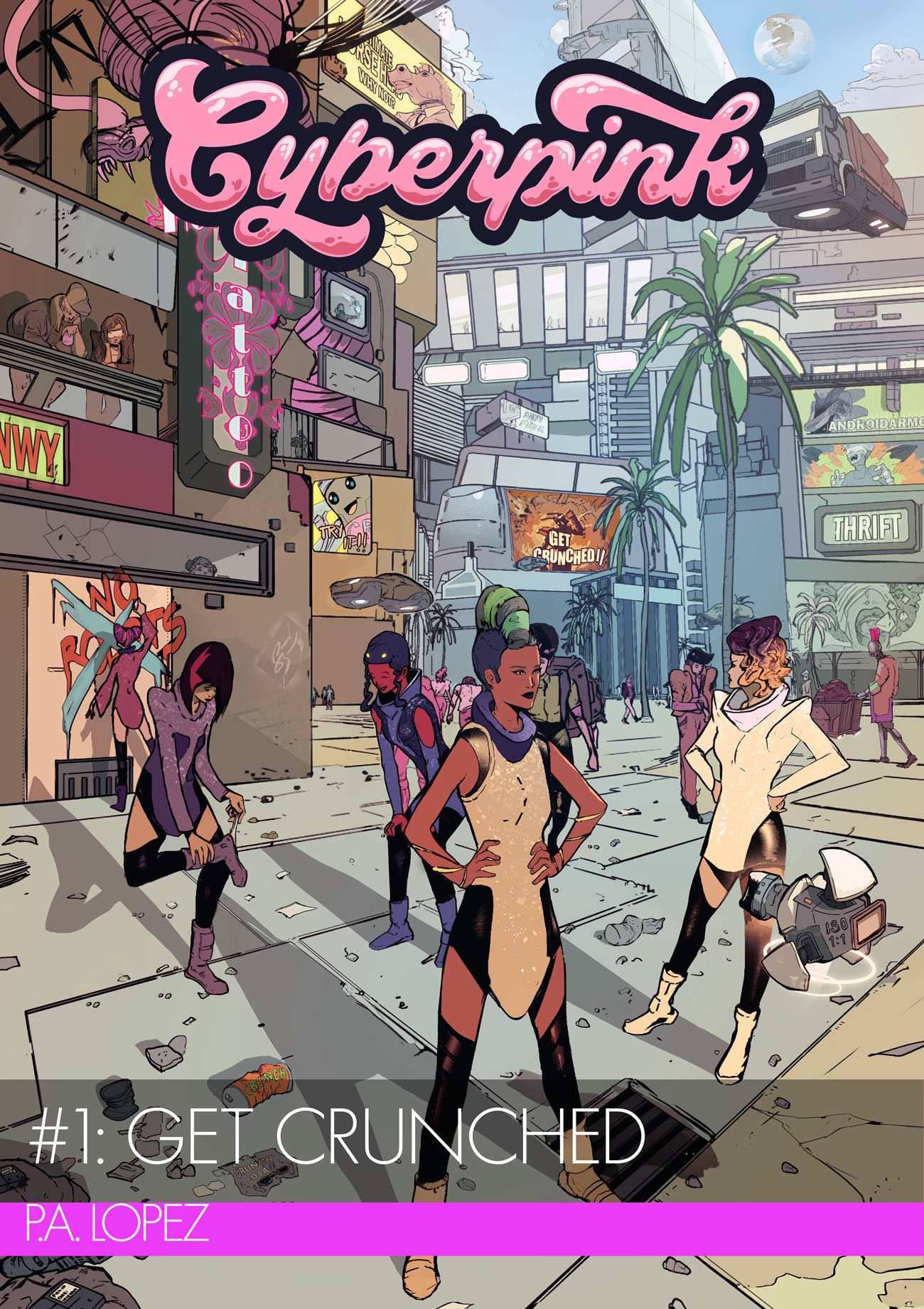 24 Mar Cyberpink #1: GET CRUNCHED is now on Amazon

Yep, What a World!

GET CRUNCHED is the mind-bendingly thrilling (okay, mainly pretty-good) first 25-page installment in the new Cyberpink series from P.A. Lopez, author of RNWY: A Space Adventure.

And it’s only 99 cents, making this the best day of your life.

If you found P.A. Lopez’s previous book RNWY too long to read, or perhaps didn’t like it for very reasonable causes (even though the critics liked it, which is something you should feel bad about), you are GUARANTEED to love the first installment of Cyberpink: by which we mean, your liking it definitely exists in the “possible” portion of the possible/impossible spectrum.

(Also, is the “possible” spectrum bigger or smaller than the “impossible” spectrum? This is a question that just occurred to us. Please find out and let us know, so we don’t have to do any work.)

What happens when a failed rock band takes a stand against racism? In New Hollywood on the terraformed moon, a struggling all-girl band must find the cause of a string of disappearances that are pitting humans against robots.

Cyberpink is a sci-fi comedy/adventure series about five girls who move to the terraformed moon in search of fame and fortune, and find themselves at the center of a conflict between robots and humans.

When a mysterious string of disappearances pits humans against robots, they run afoul of anti-robot music booker Mickey Rat, forcing them to choose between their dreams and doing the right thing.

Hey, Tell Me About The 23rd Century

Perfect timing! The events take place in 23rd century, in an area of the terraformed moon known as New Hollywood.

The moon has only recently been terraformed, under the guidance of the Synths: a form of beneficent synthetic human (not to be confused with robots) who have quietly revolutionized science and medicine, with Mars slated as their next big project.

But the Moon’s terraforming has come with costs. The early settlers (or “domers”) who occupied the lowlands (now seas) had to resettle to higher ground, and harbor resentments against the influx of immigrants from Earth looking to escape the increasingly high cost of living on Earth.

And What About Those Exciting Robots?

Many of the immigrants are also robots: easy scapegoats for resentful humans during a difficult transitional period of rising rents and too-few jobs.

Although robots have not yet been granted the right to vote, they enjoy the “Three Freedoms:” Right to Life, Right to Voluntary Work (no forced labor), and Right to Payment for Work.

Also, artwork is by Samuel Bermudez.

Buy Cyberpink #1: GET CRUNCHED on Amazon!

Thanks in advance. (That means you have to do it.)